People having been asking me about my boyfriends kitty Alien, since she is mentioned to the left on my about me section that she lives with us. Being that I picture my 3 pets all the time on my blog, and not her very often 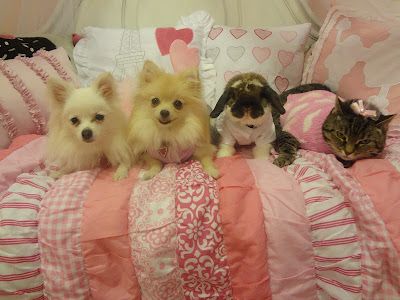 Alien is my boyfriends cats who he has had since he was around 11 years old, that makes her about 12 now. Don't ask me why her name is "Alien" lol, I would have picked something much more feminine for her, but I was not around back then. She is not a super social cat she enjoys being by herself or with my boyfriend. She's grown to be okay with me, though she does not like alot of people. She's not to fond of the other animals well the dogs, she seems to not mind little bunny Fufu, that's why she is sitting by him in the photo. Tonight I went into the dogs bedroom to get something, then there Alien was sitting on the chair in there. ( She generally hangs out in my boyfriends office) I thought to myself I wonder if Alien would let me put a bow in her hair, (this is something my dogs will not let me do, and since Fufu is a boy it dose not make sense for him to wear bow). Amazingly Alien did not seem to hate the bow to much, so then I put one of Bella's shirts on her and she surprisingly was much better behaved for being dressed then I ever expected she would be. I have tried before but have never been able to get her to sit with my 3 babies for a photo. I think she was so in shock that she was dressed she just sat there and did not move so I was able to quickly get a few photo's in! 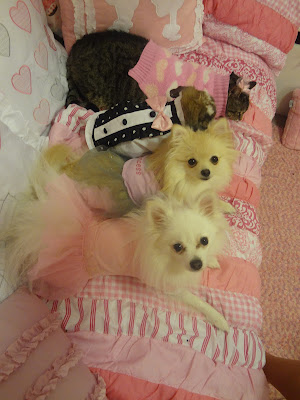 They were all dressed up! Fufu is wearing his tuxedo, being he is the only boy, funny being is also the smallest! 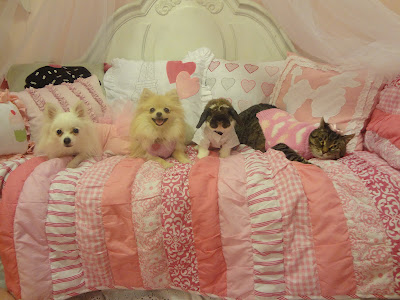 My boyfriend was pretty amazed when I showed him the pictures that I got Alien to sit for them.
Bella, Lacie & Fufu are used to always having there pictures taken!
Yes I know Alien looks mad but she sure was not thrilled.Lol

Here is some of the other photo's I was having a hard time picking the best for this post! I took 28 pics about 20 of them actually turned out pretty good!